One of the most popular posts on the Sniff blog is my documentation of the robot arm build - lots of people get the kits on eBay or aliExpress and then they arrive without any instructions. You literally get a bag of black metal shapes and some screws! 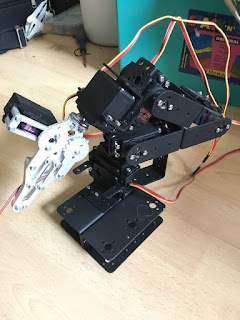 When I built the original I was careful to document everything I did, as even searching online there were no good instructions. However my research did reveal that there was a "better" kit out there, that had previously been sold, but that the kits currently being sold contained 1 less set of brackets/servo holders. As I noted in the original post, all of the weight and stress from the robot is carried by the base servo, which really isn't great.

It's fairly easy to find the brackets sold separately, so I bought an extra bracket, and finally got round to rebuilding the base of the arm. While the base servo is still taking a lot of the weight, its now supported by the bracket, spreading the stress around, and making the whole thing a lot more stable.

Here are some pics of the new base during assembly: 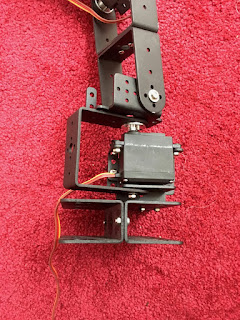 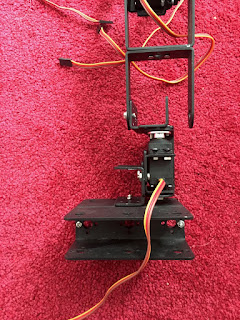 You can see that the base servo is removed from its original bracket, and placed in a new one, which is bolted to the old one... while this may seem redundant, it means there's now clearance underneath to attach a u-bracket around the whole servo. 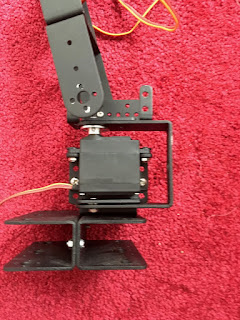 The bracket for the next servo is connected essentially as before, but now the bolts connect the bracket to both the servo horn and the new u-bracket. That means when the arm's weight starts to tip itself over, that sideways force is transmitted (at least in part) to the bearing at the bottom, rather than being fully carried by the neck of the servo.

The result is much more stable. The extra metal work does place some restrictions on range of travel, but only in positions where the gripper would probably be crashing into the table anyway, So generally its looks like a good upgrade.
Posted by I at 07:41