I don't play a lot of games, but when I read about the Humble Bundle Freedom Bundle is seemed like an easy buy - lots of games and all the money goes to a good cause. So far the game that's taken up the most of my time is a little puzzler called "Girls Like Robots". It only takes a few hours to play through the whole game, but its a lot of fun.

The premise of the game is easy enough: place cards on the grid so that they all get along with their neighbours: Girls like Robots, and Robots like Girls. Nerds like girls (and robots) too, but they also like being on their own, so they like being on the edge of the board, and they don't like other Nerds. Of course Girls don't like Nerds (while Robots just ignore Nerds). 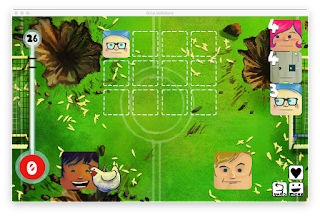 Here's a typical level (from around the point where its starts go get a little interesting). The grid is 4x3, and the level starts with a Nerd in the top left hand corner. We have to place 4 Girls, 4 Robots, and 3 more Nerds to score as many points as possible. Around 20 will pass the level, 22 to get a "Good" rating, and 26 is the perfect score.

It's the sort of problem that's really easy to solve with a little code - while we could do something clever, the easiest thing to do is just generate random placements and keep track of which is the best one. So lets give it a go!

The first problem is that Sniff only has a List which stores things in order - there's no easy way to obvious represent a 2D grid. We could make a list of strings, with each character representing a grid slot, and each string representing a row, but replacing individual letters would be fiddley.

Instead I made a list of numbers. Each number represents one square, along each row and then on to the next. We use a couple of other variables to store the height and width.

Now we can just make up a number to represent each card type, and use that number but its going to be much clearer if we use a constant. I've declared empty, girl, robot, and nerd so I can put them in the list without having to remember what actual values I used. I've also declared edge, which will come in handly later.

The first script I wrote was to print out the game status. We go along each of the rows, checking the square, and depending what it is we add a suitable letter to the message. When we reach the end of the line we print out the message and go around again.

The next thing I wrote was something to place a card somewhere in the grid:

I generate a random x,y coordinate and then calculate the index of that square in the list. This is a bit tricky but basically each step in Y moves us down the grid one square, which moves us on by width steps through the list.

If the square us currently empty then we place the card in the square and we're done. Otherwise we go around again and try another square. With that in place its pretty trivial to fill up an entire grid with a random layout:

Or at least almost random: As per the level above, I've placed a Nerd in the top left, then placed 4 girls, 4 robots and 3 nerds randomly. Of course I've been testing all of this as we go along using something like this:

Now for the hard part - we need to calculate a score for a card layout.

So to do that we go through the grid one square at a time, and calculate its happiness score. First we get the card thats in the square itself (item counter of arena). Then we check each of its neighbours starting with its left hand neighbour at counter-1.  If course that won't work if we're on the left hand edge (x=1), so we check that x>1 and if its not we set the neighbour to be an edge (in other games we might be able to use empty, but remember Nerds like being on an edge).

Having set card and neighbour we then call calcCompatablity to actually work out that pairings contribution.

This is where the "game logic" really lives. Here you can specifically see that girls like robots and don't like Nerds. As you can see Nerds are by far the most complex, as they have a reaction to pretty much every other card.

Finally all we have to do is generate lots of random layouts and see which is best:

And when we do something strange happens... it suggests the solution:
NRNG
RGRG
NRGN
Which it thinks will score 27 points on a level where the "perfect" score is 26... 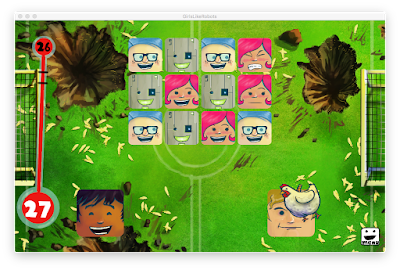 In later levels we get to add in new cards - Pies (pie makes every one happy, except robots) and baby seals (everyone loves baby seals, but they hate girls), fish and cows. There's also the rule that robots can get too excited and panic if they're surrounded by 4 girls. Some of these are a bit more tricky to implement as they don't just apply to a single pair of cards, but with the framework in place its fairly simple to add these extra features.

Check out the Humble Bundle, and Girls Like Robots. They're almost as much fun as writing the solution!