In the previous post, we used an IR LED to control Lego Power Functions motors, which was pretty useful, but what about going the other way - using a Lego PF remote to control an Arduino?

That standard Lego remote is really nice for controlling Robots as it has two levers, giving you forward/back tank style steering. There's a handy "reverse" switch for each lever, and best of all there's a channel selector, so you can operate up to four remotes at the same time. This is always a problem in workshops where everyone gets the same kit of parts, and everyones remote controls everyone else robots!

At about £7.50 from the Lego store, they're pretty reasonably priced if you're buying them for yourself, or even a classroom, though unfortunatly our workshop budget won't stretch to giving them away, as we do with the regular £1 remotes.

Lego uses a unique (but well documented) protocol, so which we've added to the regular receiveIR device, so if you have build a robot with an IR receiver you don't need to change anything, other than detect the new keypress codes.

Working with IR is cheap and easy - just get a  tsop-4828 receiver for about 50p, and wire it to a data pin on an Arduino (note that the transmit code should work on any micro controller, but the receive as some Arduino specific bits): 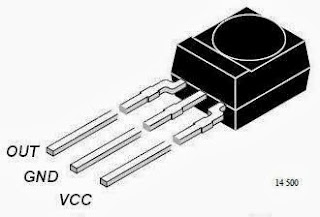 The code to read from an device, works exactly the same as it always did:

Now, if you point a lego transmitter at it you'll start getting key codes. The channel is returned in the variable irProtocal, so you can easily run multiple controllers at once. If you're really interested in making sense of keyPressed value then there's documentation available from lego. The value returned is the middle 2 nibbles of the data packet, with the escape bit tagged on the beginning.

While its possible to decode the packet based on the documentation, its probably easier to just look at the values that are being sent when each button/lever is pressed, and actual accordingly.

If we look at the codes sent by the regular remote, a value of 16 is sent when nothing is pressed. In fact you can subtract 16 from every received code and things start to make sense: Left stick generates 0 in the centre, 1 when forwards and 2 when backwards. Add these to the 16, that this remote always sends and you're in business. The right stick works the same except we multiple by four, so the value sent is 16+4*rightStick+leftStick.

Of course you can still use most other regular remotes to, but the Lego ones are a bit nicer. The code is now on live.sniff.org.uk along with an example and will by in the next desktop release.
Posted by I at 03:49