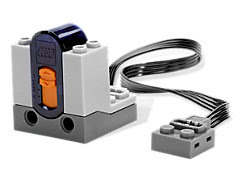 Lego WEDO is great - you can control power functions motors, but its a bit expensive, and you need a computer. An alternative and cheaper way to control power functions is with the IR control, which you costs £11.50  (important hint: NEVER buy Lego on Ebay or Amazon without checking the lego site first. It's usually much cheaper. The logo consumer store is also much cheaper than the edu store, even though you're buying the same component from the same company). Of course you'll still need some motors and lights and the remote control, but you probably have some of those anyway. Either way you're in business for about £40 rather than £135 (though of course if you buy a few more bits you'll get free shipping, so a few extra parts is saving money in the long run).

It turns out that while the lego IR system is a bit quirky, its well documented, and pretty easy to control from an Arduino or similar. All you need is an IR LED, which cost a few pennies - wire it to one of the pins with a 500ohm(ish) resistor in series so you don't break anything, and you'r good to go.

To code for it in Sniff, just make a device:

I've called it "remote" and attached it to pin 13. Then I powered up the receiver as normal, and connected a motor to the red output. You'll notice that there's an orange slider on the side of the receiver, which sets the channel. If you've only got one then you can just keep it set to 1, otherwise match the channel in the code to the receiver you want to control.

All I want to do is run a motor back and forth, so here's the code:

All the code does is set the blue output to 0 (Stop), then goes into a loop. The red value is set to range from -1 to +1: full reverse to full forwards, changing with time. Once you've set the red and blue values as you want them, just tell the remote to "send" and it fires of a few IR pulses and the Power functions should do whatever you command!

Normally at this point I'd tell you that the code would be in the next update of Sniff (and it will be!), but if you go to live.sniff.org.uk now you'll find the example code already there, and you can compile it for Arduino online!