Microbit Thermometers - is it hot in here?

If you go through the posts here, you'll find that a bit part of what we think is important is taking computing and linking it to the rest of the curriculum. We did a presentation at a recent event called "Banana Physics", which shows how you can use devices you probably already have like the Lego Wedo, and Scratch Picoboard to do real science (We'll also be showing this as a poster at Scratch@MIT2016). Measuring and recording real data and combining that with maths and physics to actually learn real things about the world - stuff you might have learned in KS4 or A Level physics in a chalk and talk class you can easily turn into practical sessions which put computing to work for real applications. By making it practical much younger kids can apply results from much more advanced theoretical classes.

One of the things you should absolutely do with your microbit is measure and record temperatures. This is one of the cheapest, and simplest pieces of equipment you can attach to a Microbit, so (as many of you are probably new to this),  I thought I'd do a quick roundup of the options available to do that:

Wait a minute, doesn't the Microbit have a built in thermometer? Well yes, sort of... it actually has two - one built into the bluetooth chip, and another in the magnetometer. So what's wrong with these? Well they're designed to monitor the chip, not the outside world. If the chip is working too hard, smart software will give it a rest to cool down (your phone does this, so it gets slower when it gets how. Similarly for laptops - they also use this to control the fans). As a result they can misleading readings. They're also not really calibrated, so you may need to add/subtract an offset before they're even slightly meaningful.

As of release 28 (not out yet, as I write this), you can use this device just by telling it to "read". It's probably good for saying "its hot in here" at appropriate moments, but after that you should think about something more accurate. 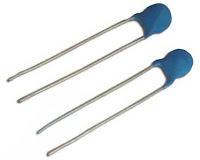 The classic way to measure temperature is with a Thermistor - their resistance changes with temperature. The most common type is a 10K NTC, so you can connect one from 0V to D0, and a 10K resistor from D0 to 3V. We can measure the voltage using an analog input and use that to calculate the resistance (using Ohms law!), and then apply another equation to convert resistance to temperature:

The 10000 is the nominal resistance of the device at 25C. 3950 is the B value for the thermistor, and we need to remember to switch between C and Kelvin at appropriate points.

This does work pretty well, and should be pretty accurate. It's super cheap (a thermometer costs pennies), and for not much more you can get on enclosed in a waterproof case so you can put it "in" things to measure their temperature. 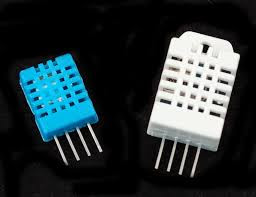 While thermistors are great,and the programming is at a level that if you put the equations on a worksheet kids should be able to work through it, the coding just to measure temperature is a lot of work in itself. Sometimes we want to do the measuring and do something with the result. In which case the dht11 (blue) is a go-to component for anyone doing this kind of thing. They cost less than a pound and can be just connected directly to 0V, 3V and a data pin (one pin is unused).

Not only do they measure temperature, they also measure humidity. However they're not that accurate. If the data you're collecting is important, then you'll need to spend £2 on a dht22 (white). This is an almost identical device, but has a much better spec, for both accuracy and range.

Functionally they're identical so all you need to do is swap out the line which makes the dht11 to one that makes a dht22. You can buy a load of dht11's for everyone to play with, and just replace them with a dht22, when it comes to actually recording real data. In fact you'll see that all of the devices apart from the thermistor work very similarly. They can also all be wired up to a 3 pin connector (0v,3v, signal) like the one on the MB^5 we designed. 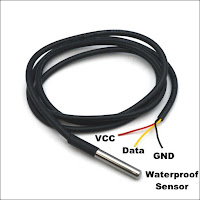 The final way to measure temperature is using a DS18B20. Again these cost about £1 for a waterproof version, and connect via three pins to the microbit (you need an additional 4k7 resistor between signal and 3v). We used two of these connected to an Arduino to compare the temperature of our pond to the air temperature - it was very exciting! You can connect multiple sensors, of the same or different types to different pins  and see how different things behave differently (block box/white box/shiny box?).

One gotcha here is that the ds18 takes about 1 second to take a reading. We don't want to hang around for 1 second doing a reading, so we tell it to start, wait 1 second and then come back to collect the result. If this starts to make your code more complex that you'd like, remember you can always do this in a separate script, and then just use the measured temperature in a another script.

DS18's are a bit timing sensitive, and don't work reliably on Microbit in Release27. Release 28 fixes this.

There are couple of other devices you can use (like the bmp180) which include temperature, that can be connected via i2c. However even if you have the kitronik breakout, it puts the i2c pins on a separate connector, making external i2c devices a bit clunky to wire up. In any case these devices are generally designed to do something else (air pressure) and temperature is just an "extra", so if you just want temperature they're not the best choice.

All of the simple devices can be easily attached to the Microbit just using croc clips if necessary, and if you have some kind of break-out then they can be wired to just plug straight in. Add an SD card and you've got a great data-logger. However you choose to measure temperature, its really easy and the potential to link coding, building and science is really great. What's the point in coding if you only ever code in computer class?