So far I'm very skeptical about the Wedo 2.0. It's yet another lego electrical plug standard that's incompatible with both the existing Wedo/PF range or the EV3. That means not only do we have to buy new motors and sensors but we have only two sensors and one motor (where as Wedo 1 can use st least use several motor types, the servo, and lights). The argument that the new plug will by more versatile and flexible is exactly the argument that was used when the Wedo/PF plug replaced the older Lego 9V system, but in practise there were less components produced for PF than for the 9V system.

In fact looking back at the Lego 9V/RCX system, it seems the most complete, and well thought out of the many the different (incompatible) Lego electrical systems. While it is a bit limited, and in theory the more modern systems should have a technical advantage the older and simpler system has one fantastic thing in its favour: compatibility.

While currently lego uses one plug for its technics range (Power Functions) another for Wedo 2.0, and a third for EV3, the older system used the same plug for all its products, so technics users could add an RCX controller. Even when NXT (and subsequently EV3) was introduced an adapter cable allowed 9v/RCX sensors to be used. Even today the Power Functions extension cable allows 9V motors to be used (and PF motors to work with 9V controllers).
The old 9V plugs were also simple: a positive and negative terminal which could either provide power, or be connected to a resistive sensor. With a bit of cleverness, they could be persuaded to do both at the same time, so powered sensors were possible. Putting the same system in the hands of the public, and educators led to an explosion of creativity (that neither the Wedo or the Microbit are able to enjoy!).

However while the 9v system is well remembered, one of its greatest creations is all but forgotten: 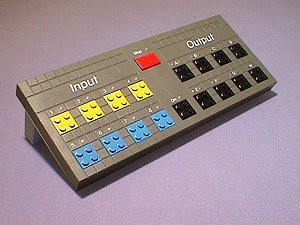 Look at that thing and ask yourself what more you could ask for from a system. 8 inputs, 8 outputs, connected via a serial port (so no drivers needed). Compatable with a wide range of cheap sensors. You'd need 8 wedo to do the same job! It was released in 1995, and its bigger and better than anything available now.

As for what you could attach, there were a choice of motors in various sizes, various types of lights, two different sirens, a light sensor, a rotation sensor, a button, and temperature sensor. The light sensor is actually very similar to the Wedo distance sensor (though not quite as robust), but the rotation sensor leaves the Wedo Tilt in the dust - It can measure angles of rotation in 22.5 degree steps, which compared to the Tilt's forward/backwards just shows how much we've dumbed down! 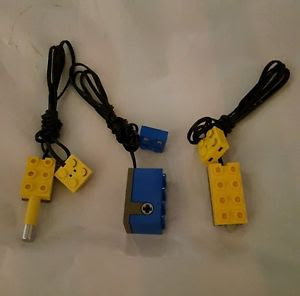 We were able to pick up one of these, and a whole load of sensors for less than half the price of a Wedo set. We also got some PF extension cables so we can use our existing PF motors (or hack them up to make new sensors!).

If you have the original cables and PSU then great, but if they've gone missing, the PSU is 10V AC, 7VA. Note that this is an AC-AC transformer, so most PSU's won't work.

The second thing you need is a serial cable. Again most probably won't work! For you youngsters too you wet behind the ears to remember serial cables, gather round and I'll tell you about the olden days...

You see serial cables were designed to connect computers to modems. Modems would talk over a phone line to the another Modem, which would then have another serial cable to a computer. The Modems just passed the message along, so were called Data Communications Equipment (DCE), while computers were at the ends of the signal path, so were called Data Terminal Equipment (DTE).

Now if you've ever encountered a pin on a circuit board marked "TX" you'll know the dilemma - is this the pin that the board is transmitting on (so you connect it to your RX) or is it the pin that you should use to transmit, so connect it to your TX. Well with DTE and DCE its really easy: DTE is "in charge", so TX on DTE is an output, and TX on DCE is an input.

On a 9pin conector, pin 2 is RX and pin 3 is TX. Thats the same for DTE (male plug) and DCE (female socket) so you just connect all the pins straight across and you're good to go...

But what if I'm not talking to a modem? I'm talking to an I/O board here... They should both be DTE? Well the "correct" thing to do is to use "null-modem". In theory thats a small box that has a DCE socket on each side. You connect each piece of DTE equipment to the Null Modem and the null modem crosses over the RX and TX wires.

which is exactly what Lego have done... They've put a female (DCE) connector on the box, so you need a male-female cable, but they've wired it as DTE. That means you need a M-F DB9 null modem cable!!! They do exist and you can get them cheaply on eBay, but they're not the sort of cable you're likely to have in your bits box.

Between the odd PSU and odd serial cable I hate to think how many of these gems have been thrown away as "not working", when they just need hooked up properly.

With that in place, you'll probably need a USB-Serial converter - any with a DB9 connector on will do. While using old school serial might seem tedious compared to USB, the benefit is that we're now good to go - no drivers, or difficult code to write. Just send some text and it works.

Even when you get everything hooked up, you still need the right software to get the thing to jump into life. I spend some time wondering if mine was broken, before getting it working reliably.

Plug it all together and fire up Sniff, release 25 or later. It should find the serial port (it'll call it an Arduino, but it calls everything an Arduino!). If you're on Windows you'll need to set ARDUINODEV to be the com port you're using. The example files are in examples/Hosted/dacta/test.

To control a motor, the first thing we need is a dacta device. the variable legoValue is used to communicate with modules. We then create a motor device on port 1. To set its speed, just set legoValue and tell the motor to update. If your familiar with the old Wedo Sniff API then you can also communicate with a specific port by using the legoConnector variable, but the new style API is nicer. The Wedo also can use this new Object based style (check the examples).

Interestingly the lego "Touch" sensors are actually analog, and can report the strength of the push rather than just being on or off.

The dactaLight, dactaTemperature and dactaRotation devices work in exactly the same way, returning a value whenever you call "update".

One minor thing to watch is that the Control Lab has a fail safe - it if doesn't receive a message within 2 seconds it shuts everything down. Normally this isn't a problem as you're probably reading sensors more often than that, but if it is just add

somewhere in your program, and it will just keep the board alive.

The Wedo 1 is a great device, the Wedo 2 maybe in the future, but the Control Lab B is really the Mother of all Wedo! It's an amazing device, and its a shame that we can't have something quite as cool available today.
Posted by I at 07:42

Email ThisBlogThis!Share to TwitterShare to FacebookShare to Pinterest
Labels: Lego