For some reason I can't quite remember I stumbled across some web pages on semaphore, and thought wouldn't it be good to write some code to convert messages to semaphore. 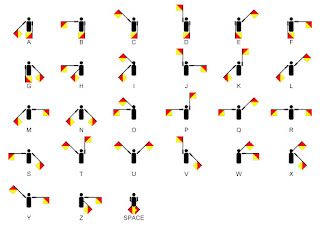 In Semaphore, each letter is represented by the position of two flags. There are 8 flag positions, numbered clockwise from 0 at the bottom, through 4 (straight up) to 7 bottom right. Of course we could just draw them on the screen but really we want to to actually wave some flags around.

There are basically three options for physically moving stuff under computer control. For robots we just use DC motors, but all you can do is turn these on and off. Then they spin fast and you've no which orientation they're in. You can add a sensor to track the rotation, but that's hard work. The second option is Servos. These would be perfect - you send them a timing signal which represents a position, and they move to that position. However there's a gotcha - servos typically have a limited rotation of about 180 degrees. That would be Ok if each arm just had to move on its own side, but if you look at the chart, you'll see that sometimes both flags are on the same side - for example the left flag naturally moves from 0 (down) to 4 (up) on the left side (as we see it), but sometimes it needs to move to 5 or 7 - a total angle of 270 degrees. While there are servos that can do this (and we could add gearing to solve the problem) we need to consider a third option.

Stepper Motors have a magnet in the middle, and a set of coils (typically 4) around the outside. 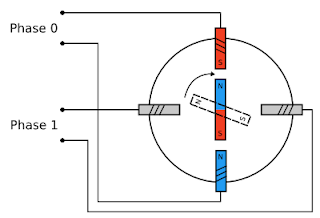 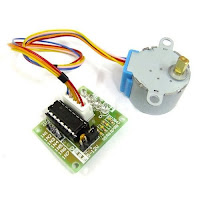 We bought two motors and controllers for under £5 on eBay. You can get them cheaper, but we wanted them now! Hook up is simple - two power pins, and 1 pin for each of the four coils. Now we can code this up:

The four coils are connected to digital outputs, and we run the "fullStep" script all the time in the background. The variable stepper represents which coil is currently turned on. In the main script we increment stepper 2048 times - as the motors I bought take 2048 steps to complete 1 revolution. We then then decrement it to rotate back. We have a pause of 2milliseconds between each step - these are physical things and take time to respond, so if you move them too fast they'll just sit there and jitter. This was as fast as the ones I bought could go.

The original version works fine, but we can get a little better performance out of it by turning on two coils at a time instead of one. When stepper is 2, both coils A and B are turned on, then when it changes to 3, A turns off and C turns on. The magnet now lines up half way between the two active coils.

If we combine these two ideas we can "half step" the motor - alternately lining it up with a single could and half way between coils. The sequence is on A, AB, B, BC, C, CD, D, DA... It's now taken 8 half steps to move the same distance as 4 full steps. Movement is a little smoother, and we have finer control over position.

Now its time to wrap all  that up in something we can use in our Semaphore code:

This improved halfStep script, uses three variables to keep track of the motor: position (where it currently is), target (where we'd like it to be), and phase (where it is in the step sequence). It then uses the half step sequence to move the motor towards the desired target. You'll note that now we're half stepping we can run twice as fast (delaying 1mS).

With that in place we can turn to the problem of semaphore. To do that we need to control 2 flags, and in a "real" programming language we'd do that with an array and a data structure containing the outputs and the positions. Unfortunatly Sniff can't do that - it is after all Scratch, and data structures are the main limitation of a language designed for at primary school children. Instead we need to duplicate the halfStep script and make it operate on a second set of coils.

We add the flag positions to two lists - one for left and right (as we face them). However there's one trick to this - down is position 0, so when we move to position 4 from there we move clockwise, but for the right flag this would hit the left flag as it rotates. We want the right flag to move from the down position to its target position anticlockwise, so instead of recording it as 0 we record it as 8. Simarly when we want the left flag to move to the 7 position, we call it -1

Now we can write some code to look up letters in these lists:

Finally we just need to initialise everything, get a message from the user, then step through the letters of the message broadcasting each in turn:

And here's the robot actually running:

(idea for next project - use GSM shield to actually receive SMS messages and show them as semaphore!!!).