After building the Semaphore robot, I was clearing up the Wedo Speed trap stuff, and wondered if we could make a semaphore robot from Lego?

The easiest way to do it would be using EV3 motors. We can run Sniff on the EV3, and the Mindstorm, and in fact EV3 motors are perfect for this task. We weren't able to use regular motors for the Arduino version, as normal motors just turn, and you can't figure out where they are (so we used stepper motors). EV3 Motors have an extra sensor built into them so you can position them exactly. That means they can easily turn the required angle, and move to specific positions. However setting up the EV3 is quite a bit of hassle.

That's one of the reasons I like the wedo so much. It's just quick, plug and play fun, without the "bigness" of EV3.

Check back with the previous post on semaphore for the bulk of the code and background on handling semaphore. We'll concentrate on the Wedo bit. Most of that is taken care of by a script called "update":

This maps semaphore positions in the "target" variables to value between -1 and +1. However we need to be a bit careful. The Lego Servo is an odd machine, which only handles a fixed set of positions. It can move to centre (0) and 6 positions each side (even though the Lego website says 7!). A value to 1 means 90 degrees, and we can move in 15 degree increments. If you try and set a value between those increments strange things happen - sometimes the servo skips, or doesn't move, and sometimes it makes whining noises. For best operation we need to move the servo value in 1/6ths
For the left motor we have to support semaphore values between -1 and 5 so lets add 1 to it, so now its between 0 and 6. Now subtract 3 so its centred around 0 (ish), then divide by 6 so we get  nice reliable steps.

But each step is only 15 degrees. We want each step to be 45 degrees. We also need a travel of 270 degrees, which the Servo can't do... That's why we used a stepper last time. But now we're using Lego, we can easily build a gearing system. A Lego small cog has 8 teeth, and a large one has 24, so if we use the servo to drive a large cog, it will turn a small cog 45 degrees, and we will have a potential travel of 540 degree!

That sort of works, but neither the servo or the gearing is that precise - there's a lot of play in both, which means that it isn't accurate enough to clearly signal. Instead we multiply by 2, so each semaphore position is two steps separate (30 degrees). Now we need a gearing ration of 1.5, which turns out to be quite hard to make. However if you have Extra large cogs they have 40 teeth, so if we drive a large cog from an extra large cog we get a ration of about 1.6 which is close enough.

The minus sign just flips the direction, as the gearing reverses the direction of rotation and we need to compensate. We have a similar mapping for the right hand servo which is on Wedo connector 2.

The rest of the changes from last time are just about tweaking the code to work right with the specifics of the build, and evolution of the code. Left and right ware swapped just because of the way I connected it, and target is now specified in semaphore positions rather than stepper positions. The timings change a bit just because of the speed of the motors and we have no way of knowing when they arrive in position (thought the lego servo is much faster than the steppers).

And here's the "finished" version: 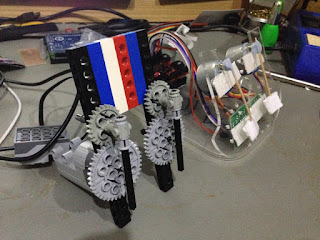 Rant Warning - you can skip the next few paragraphs...

To make things worse, Lego just obsoleted Power Functions. PF isn't officially dead (yet), but the new Wedo 2.0 uses a completly different connector. According to Lego PR, the Bluetooth connection between the computer and 2.0 hub means they "needed" to change the cable between the hub and motors... and the tilt sensor now has a "shake" mode... so they needed to change the cable! This is obviously untrue. Previously Wedo used standard PF components, but now the Wedo 2.0 has it's own connector and won't plug into anything else (whereas the old version plugged together like... you know... Lego?). The explanation is that PF is about to be replaced by PF 2.0 (there's a reference here: https://education.lego.com/en-gb/lesi/elementary/wedo-2/faqs) . There's no backward compatibility so throw out all your old sensors and motors!!

It's really about time Lego got its act together on this... three generations of Mindstorms used different cabling (with some backward compatibility at least), Power Functions was introduced to replace the old 9V technics motor system (and versions before that!), with the claim it allowed for future expansion - which only materialised as Wedo. Technics never got any sensor features, and Wedo was kept secret from the public. Each generation of Lego engineers decides that the old plug system is too limiting. Wedo 2.0 delivers nothing in terms of new sensors (yet) and in fact we loose lights and servo's, but they're asking me to throw out about £500 of my own motors sensors and hubs, just to avoid the cable to the computer.

Going Bluetooth has benefits (and disadvantages if you have a lot of them in the same room and group 1's computer pairs to group 2's build - accidentally or deliberately!),  and if I could buy a Bluetooth hub to use with my current motors and sensors and ADD to my wedo system I'd be first in the queue, but starting over with a system that's less capable...

With that rant out of the way, now might not be a great time to invest in Power Functions components! At some point there's going to be some tough decisions whether to invest more in established (but obsolete) 1.0 tech or throw out a lot of expensive stuff, and  start over.

Anyway I was able to test and get both arms working - just not at the same time! It's less precise that the stepper version, and but it works really well. Cost wise its a bit crazy - the hub and two servos would cost about £80, whereas the Arduino version cost less than £10. On the other hand, the lego version demonstrated the power of Lego - I was able fabricate the supporting structure, including gearing way more easily -  building a gearbox for arduino and servo's isn't something I could do. That's where the Wedo really pays off - just being able to combine building and coding so easily...
Posted by I at 06:25