We've got a couple of live events coming up in the next few months, and at one of them we plan to talk about how the Picoboard, Wedo and Flotilla can be used to do "real" science experiments rather than just fun e-toys. While there's nothing wrong with fun gadgets and demo's to attract attention at some point we need to harness that interest and show that programming can solve "real" problems. (I need a way of advancing my presentation slides and all I've got is this size of pizza and a $50 interface box designed for this exact situation is neither real nor a problem). It doesn't really matter what that problem is, but there needs to be some element of writing code to do something that's extrinsically relevant (and better in some way than alternative approaches - pizza has many great features, but some kind of ir or bt remote is a way better and cheaper method of controlling slides).

This led to revisiting a few of our old experiments, and prepping to fit as many cool demo's into 30minutes as possible. On of the things we wanted to demo was the hot wheels speed trap, but based using the pico board or the wedo. Both proved pretty easy to do, but we found that the pico board doesn't deal well with updating more than about 100 times per second. It gets swamped somehow, and just gives up. This is fine for measuring longer time intervals, and we set up a tube, with a light sensor at the top and bottom to measure how long a beanbag took to fall the length of the tube. However for measuring the small intervals required of the speed trap it was too slow.

The wedo on the other hand proved to be very reliable, and worthy of a mention here. 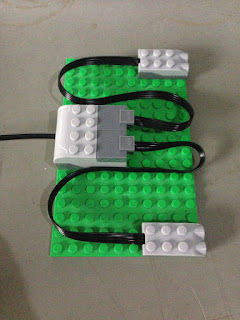 We simply placed two motion sensors at opposite ends of a board, and measured that the distance between them. Just by being Lego we git instant "extra" value (I hesitate to say free value, as its stupid expensive), it makes a big difference just being able to stuck together some kind of structure, even as simple as this, just to hold things in place.

Then just wait for the first to detect something, then wait for the second and measure the time between them (15 studs 0.8mm per stud=12cm)

The "readDistance" command sets wedoValue to an estimate of the distance in metres, so we check to see if its less tham 6cm. Then we switch to the second sensor and check that. Once we have the time, we divide that into the distance (14 studs x 0.8mm/stud) to get the speed.

If we drop a beanbag from a know height, and measure how fast its going when it passes the beam we can use the equation:

As we're dropping it, its initial velocity is 0, so we can simplify and rewrite as:

So we can calculate gravity (again!) - it came out at about 9m/s/s this time, which is pretty close.

Best of all the sensor proved to be very robust. We've used light dependant resistors to do this sort of things before, and there's always a bit of tweaking involved to get the lighting, and threshold values just right. Because the lego sensors are self illuminating and (semi) calibrated, they work without requiring much adjustment in a wide range of conditions. The lego sensors detect things in front of them rather than shadowing them, which is much easier to work with. They're also easy to mount, so you could use them for all sorts of things where you need to measure speed.
Posted by I at 02:32