Sniff on the Gameboy Advance

One of the things that we hear talking to teachers and kids is that they want to make "real" programs/games that run on actual game consoles and devices. While the GameBoy Advance is a little old now, but it fits the bill as a real commercial gaming device. As its a little older, it has the advantages of being cheap, well documented and its relatively easy to get code onto it, so now you can actually make your own game in Sniff, and download it into a cartridge, and the plug it into a GBA and have your own game running on a real device. 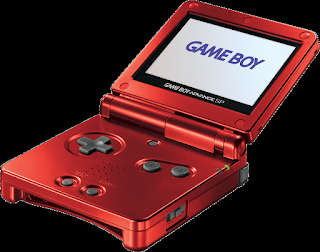 Assuming that you're already running Sniff, the next thing you'll need to do is install devkitARM. The instructions for this are a bit hit and miss, and are are directed more towards the Nintendo DS, but you just need to install the main devkitARM package and the libgba package and you're ready to go. Don't forget to set up the environment variables, as instructed on the dkARM install page.


With that done, go to the Sniff/examples/GBA folder, and we're ready to make a program.

All of the GBA buttons appear as digital inputs, so can read them easily. By default the GBA screen is set up in a simple text mode, so you can print things to it using "say". This isn't something you're going to use very much, but putting together the buttons, and "say" allows us to check that everything is working correctly.

You can compile this using the command "gba-sniff buttons.sniff" and you should get a file called buttons.gba which is an actual GBA rom image. The easiest  way to play it is to use an emulator - I used openEmu. That allows you to just fire up your ROM on you computer, and you can play it straight away.

However if you want the "real" experience you'll need a "flash cart". A few years ago everyone had one of these, and they were easy to get hold of, but they're a bit more obscure now. If you shop around you can get one, and then just copy your ROM onto an SD card, plug it into your GBA (or an original DS, which can play GBA carts), and you're instantly transported back to 2002.

There is third way which we're currently investigating... Floating around eBay and Aliexpress are handheld consoles that include a GBA emulator. These cost less that £20 and you can download your game straight into one of those via USB, and get a real handheld console experience. We've got one on order, and we'll report back when it arrives.

There's a lot more we need to say about using GBA graphics, sprites and sound - all of which are fully supported in Sniff. There's example code for using them all in the examples/GBA folder, and they work pretty much the same as they do on other Sniff devices, but I'll write more about them in a future blog post.
Posted by I at 06:28