Measuring Cheese with the Esplora

One of the new features of Release 24 is support for the Arduino Esplora. This is essentially an Arduino Leonardo (so compile programs using leo-sniff), with a whole bunch of sensors, buttons, a joystick and a slider built onto the board, so you can start programming without having to hook up extra hardware. As such you could always compile programs to run on it using leo-sniff, but now we've added got hold of one we've added support for all of the sensors. 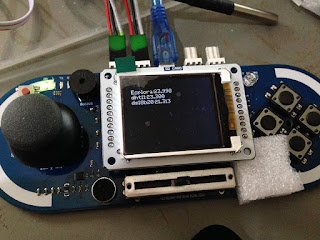 The main difference between the Esplora and the more common Uno is that they handle their usb communication to your computer completely differently. One the Uno there's a dedicated chip which does nothing but handle the USB, but on the Leonardo and Esplora this is all done in software. This is more flexible, but less reliable. If you have problems programming the board, then pressing the reset button just before you download the program will usually solve the problem.

We need to include the usb device to handle the core of the USB protocol, and then the usbConsole device so that "say" and "ask" get directed over the software USB implementation. These have been stable for some time, but we've recently seen some problems with OSX Mavericks. "ask" in particular seems to have become unreliable. Helpfully we'll get this resolved in the future.

Now for the interesting bits:

The Esplora has a regular LED attached to D13 like most Arduino's but it also has an RGB led attached to pins 5,9 and 10. These support analog output so we have easily mix colours together.

The buzzer is attached to pin D6. In fact the "buzzer" is simply a piezo speaker, and to play a sound we need to "push" the speaker in and out at specific speeds:

There's an accelerometer attached to analog inputs (yes A11 is a real thing - not a typo), and a couple of spare pins D3, and D11 which are brought out on two "tinker kit" headers.

Though tkOutA and B are labelled as outputs they are direct pin connections and can be used as both inputs or outputs.

You can access all of the above using regular Sniff Arduino code, but the other hardware on the board is a bit more tricky, so we've bundled it up in the "esplora" device:

We've got access to the temperature (though in a previous post I expressed serious doubts about its accuracy) joystick, slider, light and sound levels, four switches and two generic tinker kit inputs (not that these ARE input only).

If you have the Esplora TFT screen you can also draw stuff on it, using the standard Sniff drawing methods, having first declared a display:

With the basic stuff out of the way, lets actually do something useful with this... 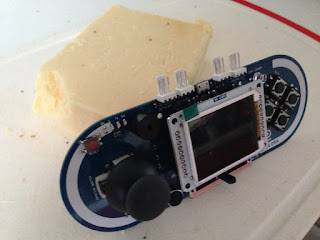 In addition to an Arduino Esplora, one of the residents of Snff Manor got a cheese making kit for Xmas. As I'm sure you all know, cheese needs to be matured in a cool place between 10 and 14 degrees. The cellars seemed ideal but some kind of monitoring system was clearly in order.

There's a lot going on here, but if we start from the middle, you'll see that we repeat 10 times, measuring the temperature and averaging it over 1 second. This makes the built in sensor much more consistent (if not more accurate). Then we compare the measured temperature to the max and minimum, and fire off a couple of scripts to update the RGB led and some text on the display.

We do this 900 times, which is 15 minutes, and calculate an average over this longer period, which we add to a list called "history". This records the last 12 hours of data, and we call a script to plot it on the screen.

I've set up four constants using the new Sniff R24 syntax. lowestThresholdTemp is 6, and using the word is exactly the same as using the number. This means we can push these definitions outside the code itself so if we need to change them, then we can see exactly where they need to be tweaked. In this first run, I've decided that the cheese should ideally be kept between 10 and 14, with a less ideal window of between 6 and 20.

When updateLED runs, it sets the RGB LED to blue if the cheese cave (thats what they call it!) is too cold, it then blends from blue to green as it warms up. When it reaches 10degrees it turns green. From 14 upwards it then starts turning red. 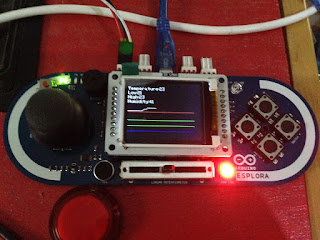 The TFT display on the Esplora is a really nice display. Unfortunately in some respects its too nice. Usually we use something like a Nokia5110 screen which is low resolution and each pixel is either on or off. Here we've got much higher resolution and full colour, which creates a real problem for us. With the smaller screens we can prepare the screen image in memory then push it out in a single blast, which minimises flicker. Here the screen is way to large to fit in the Arduino's minimal RAM, so we have to draw directly to the screen. Not only is this slower, but it means when we clear the screen to draw on it, the screen actually goes blank. Large amounts of flicker are unavoidable. To minimise it as best we can we're not going to clear the whole screen at once but rather clear off bits of it before redrawing:

The text is 8 characters high, so we use PartialClear to clear only the rows we're about to print on. Then we tell the screen to show the latest statistics.

Finally we draw the graph, again using PartialClear to get rid of only the bit we need to. There are 4 horizontal lines on the graph, representing the 4 threshold temperatures, then we simply loop over "history" drawing the graph.

We placed this down in the cellars and were able to monitor temperature, and see how it varied. The graph was particularly handy, as it was able to reveal some large changes of temperature that happened when we weren't actually there.

As we had reservations about the accuracy of the Esplora's temperature sensor, we also attached a dht11 to on of the tinker kit outputs. Things still to do include logging data to the SD card, and sounding an alarm if the temperature gets to high - "quickly! To the Cheese Cave!!!!!"