One of the goals of porting Sniff to Gameboy Advance was to get games running on something that felt like real game hardware. But what should you do with your GBA files once you're done?

Well the best thing is to get yourself a real gameboy advance, and a "Flash Cart". These are special GBA cartridges with and SD card slot, so you can simply put your game onto them. Then you can play them pretty much as if they were a real game. That's pretty neat. Unfortunately Flash Carts have become harder to find as the GBA becomes increasingly obsolete.

However in our regular trawls of the internets flea markets we came across an interesting device that looks like a PSP. However instead of playing Sony games they run a Gameboy Advance emulator! While that's not as cool as running on the original hardware, they are "real" handheld game consoles that look the part, and include both built in storage (so you can download games over USB) and a microSD card slot, so you can put games on that. 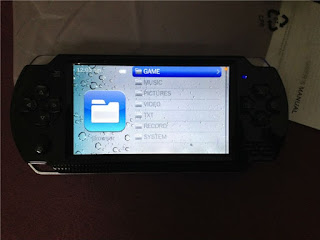 Best of all they cost under £20, so we ordered one to find out what they were like!

Within a couple of weeks one arrived direct from China. It came in a fun box, and included a set of headphones and  a USB cable but no charger, so we plugged it into a computer to charge. While it was charging we checked it over - I saw a review complaining it felt cheap and plastic... newsflash: it IS cheap and plastic. Anyone who is surprised by that I don't know what they were expecting, but with any realistic level of expectations its a pretty solid for the price. The screen and feel isn't as nice as more expensive consoles, but its decent enough. Mine appears to have a stuck pixel, but then again one time I had a stuck pixel on a new MacBook Pro (I wasn't happy when I was told it was "within tolerance", and shouted until I got a replacement) - in this case I'll live with it. 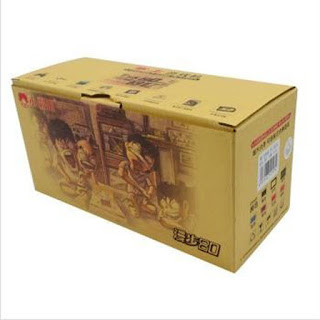 Within a few minutes it was charged enough to power up and gave me the option to operate in disc mode, charge or charge and play - so of course we chose charge and play.

The thing comes loaded with dozens of commercial games... Mostly GBA, but some other consoles are supported too. A lot of them seem to be odd street fighter/mortal combat clones in a variety of languages (including Japanese, Chinese, and French!). Firing them up and they mostly play pretty well. While most of them are pretty lame, there are couple of prime western titles mixed in there. One strange feature is that even though both the GBA and this device have shoulder buttons, the GBA shoulder buttons are mapped to triangle and square. Select on the device exits the game, and the right shoulder button acts as GBA select. It's all a bit odd. There seems to be some suggestion that the keys can be remapped, but I couldn't figure out how.

It's really hard to take pics go the screen!

Outside of games circle seems to be the "Activate" button, Cross is back, and square is change - this is odd, but works OK  once you're used to it.

However we're not here for the pirated games! Really... we're not! In fact I could see them being a serious distraction if we try and use these for workshops. Some of the "built in" games are actually on the internal storage, and can be copied to a computer, then deleted to free up space, but a good chunk of them are part of the firmware, and can't easily be removed.

At this point we found we couldn't turn the thing off while plugged into a power source... very odd. Also to turn it ON when not connected you need to turn on the power switch, and press and hold start! Well now you know!

Anyway we put the thing in USB storage mode, and it appears as mass storage. There's a folder called games, so we made folder called Sniff inside that, and dropped in Bounce Out, Asteroids and Catch the Flowers (we'll talk about porting them to GBA in a future post).

Ejecting the disk, the thing powered into its normal mode, and we were off! Selecting Games showed the Sniff folder and we selected each game... They all ran perfectly!!! In fact  they felt smoother than when we ran then on openEMU on my Mac. This might have been helped by the smaller screen, and the feel of a real game console, but they worked great.

One gotcha is the screen resolution... It's higher than a GBA. More problematically its not an exact multiple. There are therefore two ways to run a game - either with a large black border, or "full screen". Unfortunately in full screen mode some GBA rows and columns get doubled up, while others don't. This looked pretty bad for Bounce Out, as the ball wobbled in size as it moved, and the right hand blue line almost disappeared. However for most games full screen looked pretty good. 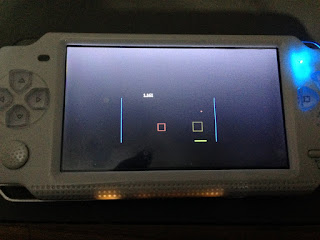 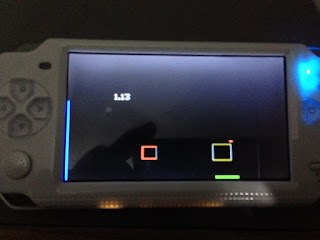 Overall this seems to be an awesome toy. I could see us buying a set of them to use with kids in more advanced workshops in the future. Proof reading through this I note I've used the word "odd" quite a few times, and this is certainly a device that has its quirks, but the "in-house test team" who did the artwork and sound for Catch the Flowers were pretty blown away to see their own game on real hardware. For less than £20, that's got to be worth it!
Posted by I at 12:55