It's finally here! Way back at the beginning of the year Pimoroni announced a project on kickstarter to make it childproof to plug sensors into a Raspberry Pi. While we love Arduino, the Flotilla gave the chance to do similar kinds of physical computing with a much younger age group. While Sniff is possibly a bit advanced for the Flotilla's core audience, children grow up... and taking cool hardware that was bought for one age group and letting them reuse it with Sniff when they're a bit older not only makes the equipment costs more manageable, but also lets kids focus on what they're doing in software without getting scared of new hardware.

Plus they looked pretty cool, and the engineer behind them - Phil Howard promised they'd be good and hackable, so lets go... 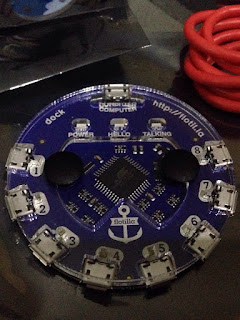 Finally (a little late, but just in time for Christmas!) it arrived. Now the normal thing to do (and what I would normally do with new hardware) is follow the instructions to check its all working right, before pulling it apart to see how it works. However in this case I decided to jump right in, and see what makes it tick straight away. One of the reasons for that is that Flotilla is designed to work with Raspberry Pi. I understand Pimoroni's justification for that (marketing and support issues), but Flotilla is totally wasted on Pi. It's USB so plugs into a regular computer and works just fine, and the idea of having a simple USB breakout for hardware boards is that you don't need stuff like GPIO, so you're much better off sticking with your regular computer.

So I plugged it straight into my Mac to see what happens...

First thing is we get a serial port,so lets fire up a serial monitor and see what happens. You need to set your serial port to 9600baud, and send <CR> carriage returns - NOT LF/Linefeeds, or CR/LF. Then you're in business.

As you can see you can put your name in, and if you've  got more than one dock you can give each one a different name. You can change these who the "name dock" and "name user" commands:

Now for the fun bits! Plugging in a device to one of the eight ports, and the Dock sends you a message:

c for connect, the port number, and then the name of the device connected. And when you disconnect it you get a disconnect message:

If you don't fancy keeping track of all that, you can just type "e" to enumerate to get a list of all connected devices:
c 2/weather
c 4/rainbow

You can get this in a slightly more human friendly, but less computer friendly debug message by typic "d".

One minor quirk is that the channel numbers are numbered 0-7 in the opposite direction to the numbers on the board which go from 1-8. That means that "weather" on channel 2, is actually plugged into the socket numbered 6 (8-2=6). Probably best handle that in the low level software somewhere.

Touch sends a message whenever one of the buttons changes state:

Light sends three values, but looking at the Python code, the first value is the brightness.

Most of the input devices should be pretty obvious.

Rainbow is the only output device I have (I got the medium kit ), and they're a but more tricky.

The command to talk to  a device is "s" so to turn on some of the LEDs we type:

Anyway - that's all the info I need to get this thing running in Sniff...

[Update:theres now a follow up to this post, which explains how to easily use  Flotilla in Sniff along with a bunch of example projects]
Posted by I at 06:53