As a Xmas treat for myself and the other robot lovers in the family, I recently bought a robot arm kit. Compared to things like the horrid Maplin robot arm the versions from China are relativity cheap, and remarkably substantial. They use six servo motors to drive them and can pick up some quite heavy stuff. Unfortunately they come without instructions... They arrive in the post as a bag of black metal brackets and bars with absolutely no indication of how they should be assembled. I've therefore made a particular effort do document the  build here, 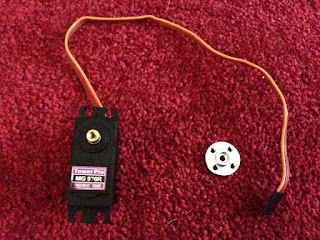 The better servo's you can afford the better your arm will perform but as we need 6, and good quality servos can be expensive I chose to use MG996R's. I was able to get the six for under £20, and they have the distinction of using metal gearing. Most cheap servo's use plastic gears which aren't up to the task of moving a pretty heavy arm. If you feeling like experimenting you could use faster/plastic servos for the end of the arm (where strength is less important), and pay more for bigger/stronger servos at the base (where you need the strength), but to keep things simple I just ordered a batch of the single type.

The other extra compont I ordered was a set of metal servo horns. Servos come with a bunch of different shaped bits of plastic you can use to attach them to your hardware, but again we need something that's a bit stronger than usual. I read a post which recommended using these circular ones, and totally recommend the extra few pounds spent, rather than risk your build on some bits of plastic. 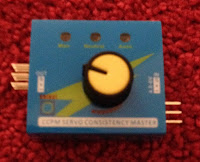 The other extra item you might not have that's going to really help this build along is a servo tester. These cost about £3 on eBay, and you just plug a battery in one side, and a servo in the other. Then turn the dial to move the servo, and check its range of motion. It also has a mode to move the servo to its centre position which is really handy when you're putting all this together.

I started by putting together the gripper. This is pretty easy, but there are couple of easy mistakes you can make - if you do it in the wrong order you'll not be able to fasten all of the screws. 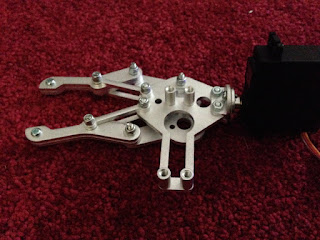 Attach the horn to the wrist servo first, then attach it to the gripper. 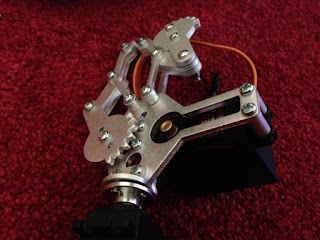 With this done you can now have some fun using the servo tester to control the gripper and pick things up. It's remarkably strong! 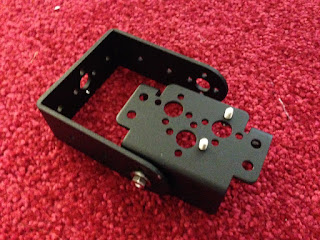 With the gripper completed we can work back down the arm. The above picture shows the beginnings of the joint assembly thats used for the three main joints on the arm. It consists of a U-bar and a servo bracket. What's less obvious is that they're bolted together with a bearing between them. Somewhere in the packaging you'll find what look like three fat washers, but infact they're bearings which are going to allow the joints to move smoothly.The bearing goes into the U-bar (from the outside) and then you can put a machine screw through from the inside (so the nut goes on the outside), The two pieces are secured together now but can still move freely.

You'll notice that there are a couple of short screws poking out from the servo bracket. You can use these to bolt on another bracket, which we'll put the write servo in. Make sure you use short screws as if they're too long you'll not get the servo to lie flat. 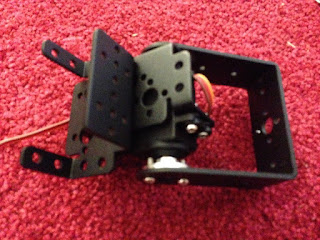 With that bolted on you can insert the servo and horn. You can get a better view from the other side: 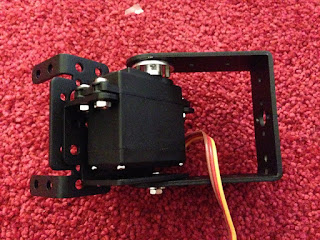 Use the servo tester again to make sure that the range of travel is appropriate. Finally you can bolt the servo to the bracket, using the rubber grommets that probably came with your servo to keep everything nice and snug. 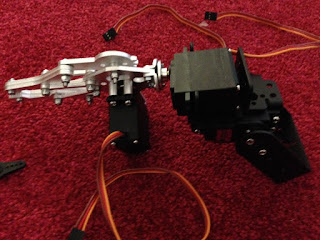 Here I've put the wrist servo and gripper into place to get an idea for what it will look like and check the range of movement again, but as the gripper and two servos are quite heavy, we'll leave final assembly till the end.

At this stage I turned my attention of the other end of the build - the base: 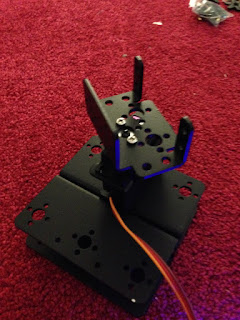 The base its quite easy to get started with. There are two larger "flat' u shapes that bolt together to make a platform. Then we bolt a servo bracket to this. A servo goes into the bracket, and then we add attach a second bracket to the servo horn so that we can spin this around. 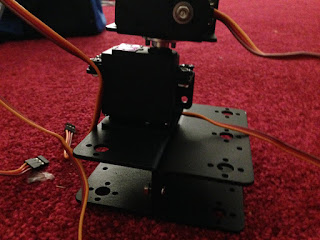 This is a pretty horrid design. The only documentation I managed to find for one of these arms was a you-tube video, which used a base rotation mechanism like the other three joints, but oriented horizontally. One of the U-bars and a fourth bearing carry most of the lateral forces in that design, but here all the twisting load is on the axle of the servo. I suspect this servo isn't going to live too long. The older design also had a larger/heavier platform so was more stable. This one will need to be bolted to the floor. If possible see you can find a kit which uses the older design. [update: I added an extra set of brackets to support the base better] 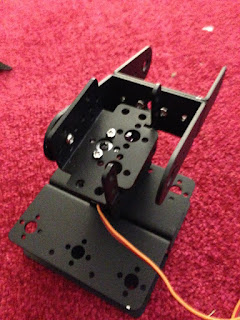 Anyway... Working with what we've got, we use the top servo bracket as the basis for another joint, just like the one we built before. In the above pic the bearing is holding the next pair of u-bars in place (they're already bolted into an H). All we need to do next is insert the servo, and we've got a working base: 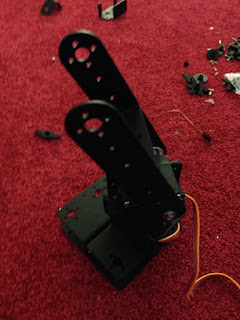 Now we just need to make the final join that connects the top to the base. 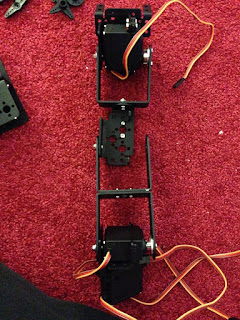 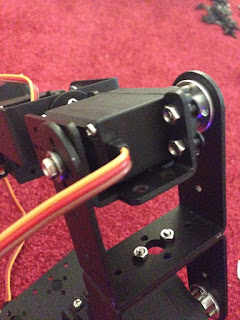 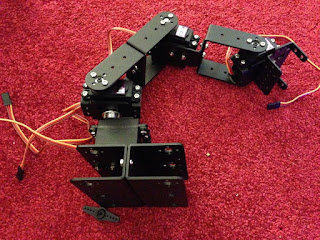 Here's a close up of the final joint, and the whole arm from the side, which gives a good idea of how everything goes together. All that's left is to bolt the wrist servo into its bracket and you've got a robot arm!!! 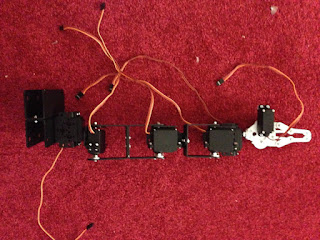 Use the servo tester to run all the parts through their range of motion. Hopefully you checked each joint as you built it to make sure that the servo was correctly centred. If it not quite right then you can try and make some adjustments now, but its tricky.

You'll find that un-powered the arm isn't strong enough to support its own weight, and it will keep collapsing. However powering up each joint will show that in fact its going to be pretty powerful. I guess you could use 6 servo testers(!!) to control the thing, but tomorrow I'll hook this thing up to an Arduino and we can start driving it properly!
Posted by I at 12:47