Everyone loves games, and Scratch makes it really easy to build simple games. However when we built Sniff we wanted it to be more like a "real" programming language, that could be used to solve all sorts of problems - not just sprite based games.

But of course that doesn't mean that writing sprite based games isn't fun! As we're rounding out the support for Sniff, we've now added support for Sprites, so you can write Scratch like games. However Sprites aren't part of the language as they are in Scratch - they're devices. While this means the two systems aren't exactly alike, it makes the implementation a lot cleaner, and makes it possible to do things that would be very difficult in Scratch.

We'll be developing the documentation for this over the next few weeks, but here's a brief introduction (and you can check the examples in SNIFF/examples/Hosted/sprite).

We start by making a whole bunch of devices and variables. The SpriteManager is going to look after all of our sprites. We'll use it more in part 2 of this tutorial, but its most important user facing task at this stage is to handle the drawing. You can ask individual sprites to draw, but for simple games, we're just going to task the spriteManager to "drawAll". We can put this in a separate script and just let it run. 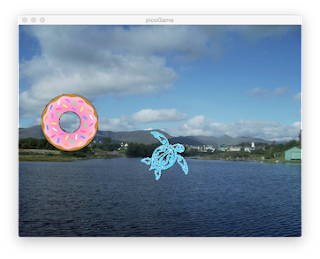 The sprite manager uses the display device (which currently has to be a window, but we hope to support other display types in the future), which in turn uses a nativeFile device.

We make three sprite devices, starting with the background - by default they get drawn in the order they're created, so background has to go first. We then load up some images to set the appearance of each sprite. Here we've only loaded up one costume per sprite, but you can add up to 8, just by calling loadCostume again. "setCostume" and "nextCostume" let you cycle through the different appearances.

Sniff windows are fixed at 640x480, so we move the background image to the centre of the screen:

Alternativly we can turtle style graphics, with "turnBy", "turnTo", "getRotation": and moveForward:

We can combine that with code to read from the keyboard to move our character around:

Now we need to configure the collision detection:

We call "checkTouching" on a sprite to discover it its hit something hittable. If it has (in this case) it must be the donut, in which case we increase the score by 1, and move the donut to a new random location.

Using these basic sprite functions its possible to write the standard chase the target, Scratch type games in Sniff. In addition Sniff has a much more powerful way of dynamically creating sprites through the SpriteManager, so you can spawn new sprites as your game is running, rather than having to code them all at compile time. The two approaches play nice together, so you can migrate to the advanced API when you're ready, but we'll leave that till next time.
Posted by I at 02:35