Sniff's come a long way really fast since we initially started developing it, but two really important things things have been on the TODO list since day 1. Getting a version running on Windows as something we knew was important, but getting the resources to develop it held things back until last month when we finally released version 11 for windows.

We're excited now to be able to be able to tick off the other big outstanding feature: Sniff now has an IDE! Getting an IDE running was tricky because, while writing command line code that will run on Mac, Linux and Pi is relatively easy (Windows is a bit harder, hence delaying Win32 Sniff), every platform has its own way of drawing on the screen. It's really hard to write a program which draws on the screen which runs without modification on lots of platforms. There are tools to make it easier, but they're not ideal, and often require the end user to install libraries and the like.

We wanted something that was simple, lightweight, and ran on all the platforms that Sniff ran on... We were stuck. Then last month as part of the win32 work, we wrote a Sniff device that could open a Window. Originally it was intended to be just an alternative to the Linux frame buffer device, but once it was working on win32 and X11, there was a lightbulb moment...


We could write the Sniff IDE in Sniff!

It was perfect - by definition Sniff runs on the platforms we want to run the IDE on! Not only that, but it would demonstrate that Sniff was actually pretty powerful, and could do "real" programming. Developing a program like that would shake bugs out of the system (we found a couple of bugs, and tightened a few other things up), and best of all once we released it, if you don't like it you can add feature yourself, because its WRITTEN IN SNIFF! 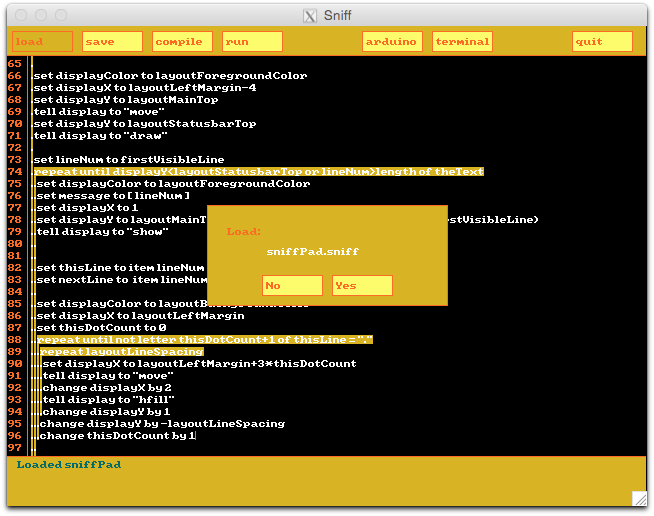 And here it is! It runs identically on Windows and Linix (including Pi). It will also run on Mac, but requires X11 to be installed, which isn't ideal - we're looking at how we can fix that!

Install and setup Sniff as usual, then cd to the directory you're using to keep the code in, and type "sniffpad", and off you go.

On the toolbar on the top are buttons to load and save. These bring up a dialog panel, where you can type in a new filename. You can also use up/down cursor keys here to scroll through existing files, which turns out to be pretty neat.

To run your code on the computer, first you need to compile it using the compile button, then run it with the run button. If "run" doesn't work on a Linux machine then check you have "xterm" installed. It's pretty standard so you should be able to install it using "apt-get" or "yum" if you don't have it already.

If you want to work on Arduino, you can use the next button to complile/download. The terminal opens a companion program "sniffterm", which talks to the arduino via the serial port. This is handy even if you don't use sniffpad.

Finally you can quit, which asks you if you want to save first.

That's really all there is to it! It's pretty basic, but its not really intended to be a full blown IDE - its for writing simple programs and getting them running - most of the Sniff examples are less that 30 lines of code, so fit on a single screen. Unlike the Arduino IDE we don't intend this to be the main dev tool for everyone - Sniff is command line based, and this is a layer on top. Use whichever works for you (and if you want to, use Eclipse, or Xcode to edit Sniff code!). On the other hand if you think there's something missing (copy and paste is the on thing we will be adding soon), then you can load the source for sniffpad up in sniffpad itself, and make it better!