Ray Tracing in Sniff (on Arduino and Pi).

There are two ways of producing 3D computer graphics: Ray Tracing and Scanline. Scanline approaches draw one object at a time, while ray tracing draws on pixel at a time. For big scenes like the ones used in movies this makes Scanline more efficient as you don't need to hold millions of objects in memory - just the one you're drawing. Only in the last few years have machines got powerful enough to ray trace significant amounts of movies - almost all the Pixar stuff to date has been Scanline. However in the last few years ray tracing has finally made it to the movies, as it can produce some optical effects which are hard to do otherwise - its just slow. 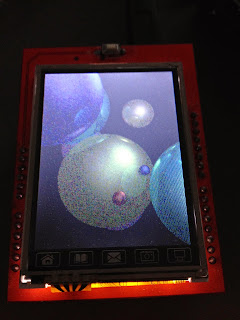 However to make 3D graphics on an arduino we have a different problem - we can't hold the pixels in memory! That makes scanline pretty much impossible. However if we're prepared to wait, and keep out scene simple enough that it can fit in memory, then ray tracing is perfectly possible.

We can make a simple scene by storing the parameters to describe 10 spheres in a list. Ideally we'd use one list for each parameter (sphereX, sphereY etc) but that would use up too much memory. Storing them like this only makes one list, so it will fit on an Uno.

Our main program then becomes:

For each pixel in the display we work out a vector dir[XYZ], that a ray from the camera (at origin[XYZ]) would travel along. We set the z component to represent how far the screen is from the viewer, and adjusting that will control field of view. Then we normalise dir so that it has a length of 1 (not strictly necessary, but usually a good idea). We then call the trace script to figure out what the light along that ray will look like.

The important part here is that trace calls intersectScene to figure out what object the ray it. If it didn't hit anything, then it stops. If it did hit something, then we need to figure out its colour. To do that we'll need more information:

nDotI is usefull, as it tells us to what extent the surface is facing the viewer. vVec is the vector from the hit point towards the observer, and ref[XYZ] is the mirror reflection direction.

Lets assume there's a little bit of light hitting the surface randomly, just because light bounces round in the real word. We call his Ambient in computer graphics - its a bit of a bodge, but it stops black parts of the scene being completely black, and we just add a little bit of this to the pixelColor

We can use that vector to calculate how much of the lights energy hits the surface:
...set lightAtten to lightPower/(dirX*dirX+dirY*dirY+dirZ*dirZ)

Imagine a sphere, with a point light source at its centre. All of the energy from the source hits the inside of the sphere. The energy s shared over the sphere's surface area. If we doubled the radius of the sphere, its surface area would increase by 4 - area is proportional to radius squared, so we get the inverse square law - lights get dimmer with the square of distance.

N.L tells us if the surface is facing the light source - if its not we move on.

If the surface is  facing the light, we fire the ray into the scene, and hope it doesn't hit anything. If it did then we're in shadow. If we get this far we know we know the light actually hits the surface we we need to calculate how much is going to get reflected towards us - this is called the BRDF.

There are lots of different ways of calculating this - different surfaces have different BRDFs. It's what makes metal and and plastic look different, even when they're the same colour. Here we're using a simple metalic style BRDF.

We know the direction of the viewer and the light. To get a perfect reflection of the light towards the viewer, then surface normal would have to be exactly half way between them (angle of incidence=angle of reflection). But chances are this isn't the case. Instead the question we can ask is what would N need to be to get a perfect refection - we calculate this and call it hVec.

Now we need ask now similar are N and H? It turns out that's really easy to calculate using a dot product. A good way of thinking of the dot product is "how alike are these two vectors?". 1 means they're the same, 0 means 90 degrees apart, -1 means opposite (assuming they're normalized). So we take the dot product. Raising that to a power means that we get a value near 1 only when they're very similar. Then we use that to add some more colour to the pixel.

Having calculated the "local" illumunation - light from light sources hitting the surface, we add some "global" illumination - light which bounces of more than one surface. If we were doing this in C we might use recursion to call trace again, but its actually more efficient to just set up the new direction and go back round in a loop:
..
..set dirX to refX
..set dirY to refY
..set dirZ to refZ
..broadcast normalizeDir and wait

The actual intersection code is pretty simple - we just go through each sphere in turn, and check if the ray hits it. If it does, then we see if its closer than the closest hit we've found so far. We also check if its not too close to the stating point - if we're firing a ray from the surface of a sphere, we don't want to hit that sphere due to rounding errors.

As for the actually sphere intersection itself - it looks complex, but its straight out of the textbooks so I won't discuss that there.

The final interesting bit of code is in calculating the pixel colours. So far we've been adding up pixel[RGB], and we expect to have a value somewere between 0 and 1 (though values higher than 1 are totally OK too!), but in Sniff we use colour values for each channel as whole numbers between 0 and 7 - this is clunky, but means you can set rough colours quickly and easily... if we think of a better way then we'll use it. To turn our light value into a Sniff colour we use the code:
...set pixelR to round (pixelR*7+(pick random 0 to 100)*0.01-0.5)
...if pixelR<0
....set pixelR to 0
...if pixelR>7
....set pixelR to 7
(repeat for G and B)
...set displayColor to 100*pixelR
...change displayColor by 10*pixelG
...change displayColor by pixelB

We take our value and scale it to the range 0-7. Then we add a random value in the range -0.5 to.0.5, before rounding to the nearest whole value. This randomness surprisingly makes the whole image look much better, as it hides banding artefacts by turning them into noise. Statistically the error in the image is unchanged, but rather than getting blocks of pixels which are VERY wrong, we get a little noise shared evenly over the whole image, which looks MUCH nicer.

And there you have it. An Arduino ray tracer in Sniff.

As this is purely calulation diven the code works essentially unchanged on any Sniff machine. Moving the code onto a Raspberry Pi, and replacing the first line:
make display tft device
with
make display framebuffer device
and you get a version which works on Pi (or other Linux). 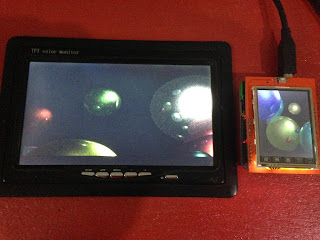 Running on Pi is about 100 times faster. Hardy surprising, as the Pi is running at 50 times the clock speed. However more importantly the Pi has an FPU - a floating point unit making the numerical calculations massively faster.

Sorry if I've had to gloss over a few parts of this - there's a lot of maths and physics involved, and Rendering is a pretty big topic to squeeze into one blog post (I could write a book... or two!), and Sniff isn't really the ideal language for it  - it would be much easier in a language with data structures and proper functions (though not the worst), but it was fun to try.

Hopefully I've explained most of what going on!