Release 10 had a really significant change to the way it handles devices - changes that mean rewriting code for every device that's been supported so far. It was a LOT of really tedious and intense work, but the change was necessary, and now we're going to do an experiment that uses the new feature that all that work went towards.

In the original implementation of Sniff it was clear that there needed to be a way to hook into external library code, so that Sniff wasn't just a sandbox, but a real tool. In Scratch that takes the form of additional "extension" blocks, but that approach is fundamentally problematic (and the Scratch Team are still struggling with this), as it creates an explosion of blocks. Each new device essentially extends the language. This wasn't really an option for Sniff. Instead we added the 'tell" command so you could tell a library to "doSomething", essentially providing a mechanism for Sniff to call an external C function. Libraries of external code are good solid programming practise.

However it turned out it worked a little too well. We LOVED devices, and writing new devices for all sorts of hardware was great fun. And as we wrote more we started to want to do more with them, and so for example the DS18 thermometer library and the DHT thermometer library started to become more like objects. We added the configuration parameter so you could bind a ds18 to a particular pin. Then we added aliasing so you could swap between different libraries with similar operations.

However one thing was missing: multiple instances. What if we wanted two thermometers? Sure we could use one ds18 and one dht, but that's clunky. We needed a way to connect two ds18's on different pins. With the new release that becomes possible, and it works exactly as you'd expect. Let's connect two ds18:


and it simply works. Of course not all devices can have multiple instances - for most devices its simply not possible to physically connect multiple pieces of hardware, but for the types of devices where it makes sense, it should just work (by which we mean we spent many hours making it work, so it would "just work" for you).

So what can we do with this... Well in the gardens of Sniff Manor is the ornamental lake, and in winter the fish seem to get along fine, even when the surface freezes. If we had two thermometers we could measure the air temperature and the water temperature a few feet down and understand whats going on. 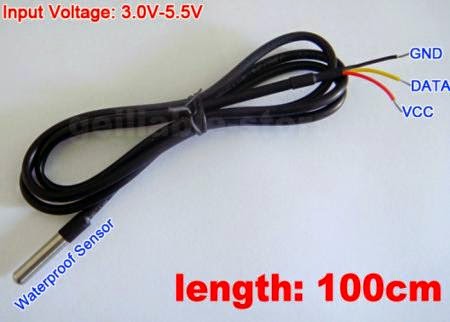 The DS18 family of thermometers, are cheap, use a single pin, and are available in a waterproof casing/cable configuration. Wiring up a DS18 is pretty easy: connect the black wire to earth, red to 5V, and yellow to a data pin. The only tricky bit is to connect a 4K7 resistor between  signal and 5V, and you're good to go.

As this is going to be outside, running on batteries an Arduino is a better choice than a Pi, but the DS18 plugs into a Pi fine, so for other applications the code would run fine on a Pi too.

As this wasn't going to be connected to the computer I added an i2c lcd text display. The wiring here is even easier, as they simply plug into the breakout shield with a 4pin dupont cable. With that done the code is about as trivial as it gets.

The next step was to add data logging, so I added an SD card reader. Using the sdcard and filesystem devices I added code to write the readings to a file once per minute. At this point I could have removed the LCD display, as its using battery, and isn't strictly needed to log the data, but it was still useful to be able to see that everything was working.

Now we just put it all in a plastic bag, and of down to the lake! 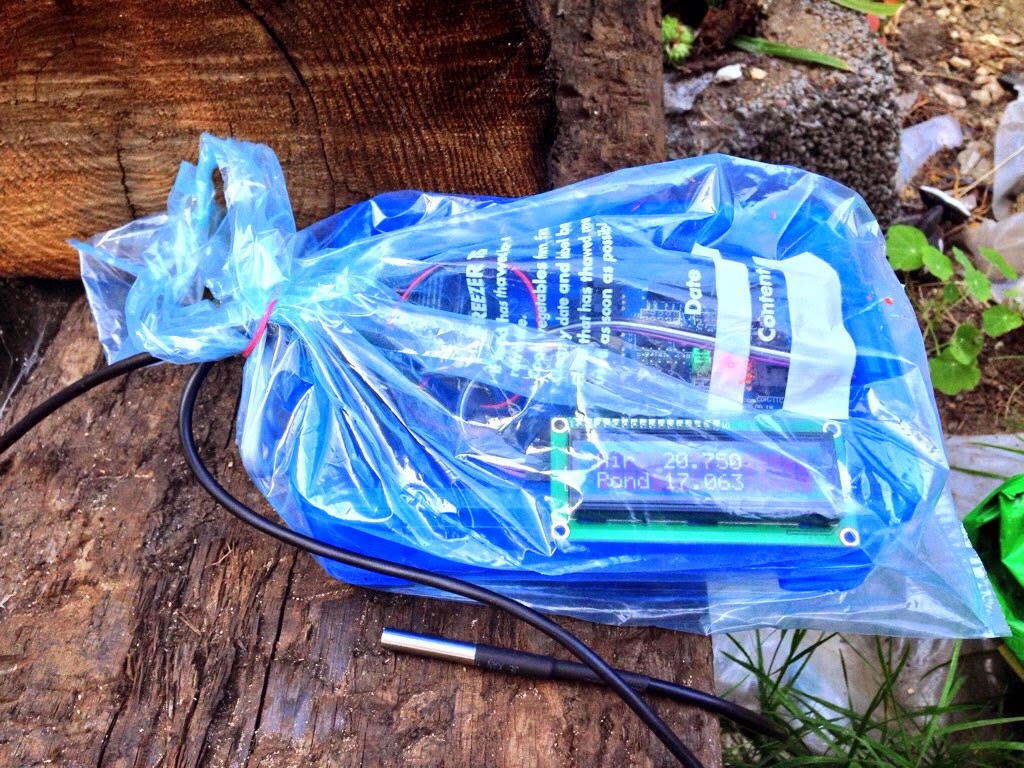 Here's everything set up at around 6PM at night. You can just about see that the air temperature is around 21 degrees C, and the water is 17. 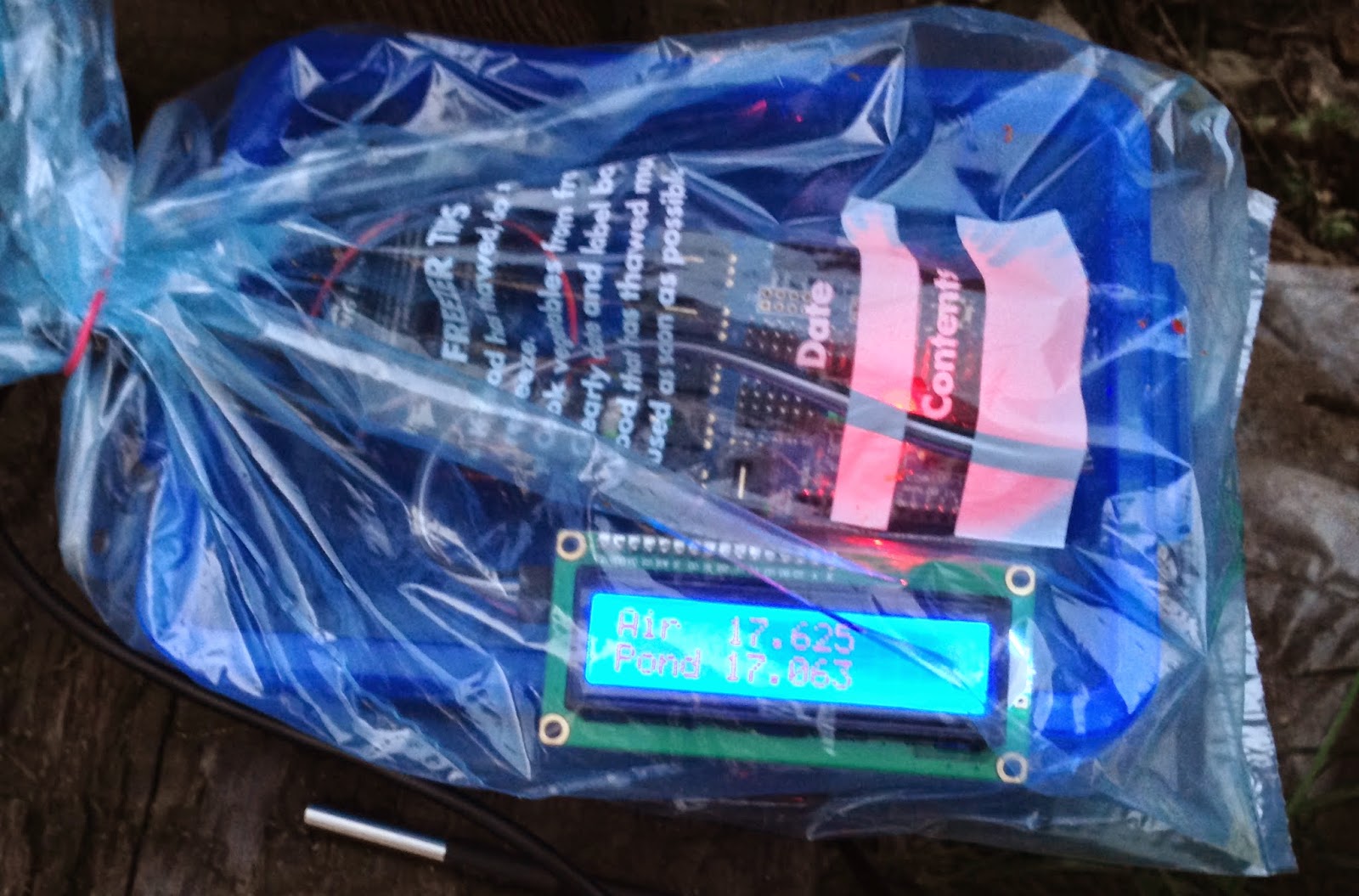 Two hours later we're just around sunset. Air temp has dropped to just under 18, but the water has stayed rock solid at the same 17 degrees.

The data on the SD card is record as text with each line containing the time, and the two temperatures, with comma's between them. This is exactly what we need to load into any spreadsheet program as a CSV file. I bit of tweaking an we get a graph: 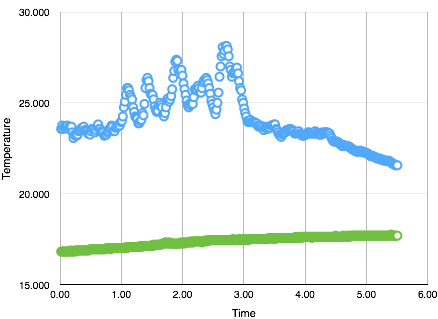 Wow! That's real data that is, and it shows something pretty amazing. This log runs for a little under six hours starting late morning. Nothing much happens for the first hour, but then the sun gets over the trees at around lunchtime, and the air starts to warm up from around 23 degrees to over 28. We also get lots of great peaks and troughs - presumably from cloud cover. By mid afternoon we see that the has got less intense, and temperature starts to fall away.

However sometimes the most exiting thing is what doesn't happen - look at the green line. It starts at about 16.5, and be mid afternoon its risen by only 1 degree. Towards the end of the day its still going up slightly (as the sun is still hitting it, and the air is still warmer than the water), but it's levelled off.

To find out how much energy that is in total we need to know water we have! That's easy its 5mx2m and 1m deep. Or 10 cubic metres. 1 cubic cm of water weights 1g, and there are 1million cubic cm in 1 cubic metre. In other words we've got 10million grams of water!!!!! That sort of changes things as our 1j/g/h is now 10,000,000 joules per hour! That's about 3000 joules per second, which are better known as Watts. 3kWatts is quite a lot of power - if you tried to get that much power out of an electric socket you'd blow the fuse! You could power pretty much all of the electrical stuff in your house with that... until it gets dark.

Theoretically we could get more than that: According to more accurate measurements we should be able to get 1.4kW per square meter which would make a very impressive 14kW of energy going into the pond, but no system is 100% efficient, and the energy going into the pond is also heading the ground at the bottom of the pond (aka the planet - its pretty big!), so if we're keeping 3kW (about 20%), then that's pretty good.

I get really excited when an experiment works like this - we got a great graph, analysed some data, and got some big numbers which actually match what the theory says we should get. That's a good days work!

the next step is to hook up some better batteries, and solar cells and see if we can get this thing running 247!
Posted by I at 10:24