We all love quick, and cheap science projects, so when I saw a "heart rate sensor for Arduino" on Ebay I almost grabbed one instantly... but then I looked a bit closer and realised that it looked a bit shoddy... Was I really getting value for money from my hard earned $2?

Reading the description and looking at the picture it appeared this thing was just and IR led, and photo-transistor soldered onto a PCB. The LED shines into your fingertip, the photo-resistor measures how much is reflected back (or transmitted - either should work). It turns out this is a perfectly reasonable way to measure blood flow. More blood means more (or maybe less?) reflection, means a changing voltage we can measure, and plot!

However I didn't feel like blowing a whole $2 on this - times are tight, and anyway I bought a whole bunch of IR emitter/photo-transistor packages last week to do proximity sensing! They're called TCRT5000's and for $2 you'll get a bag of ten. Wiring them up just needs a couple of resistors, and we can start measuring with them. 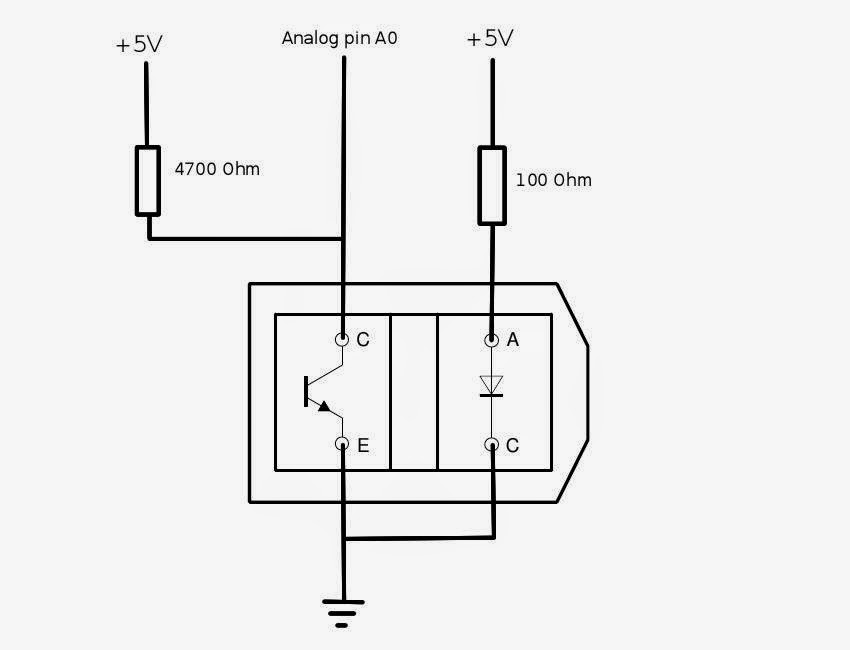 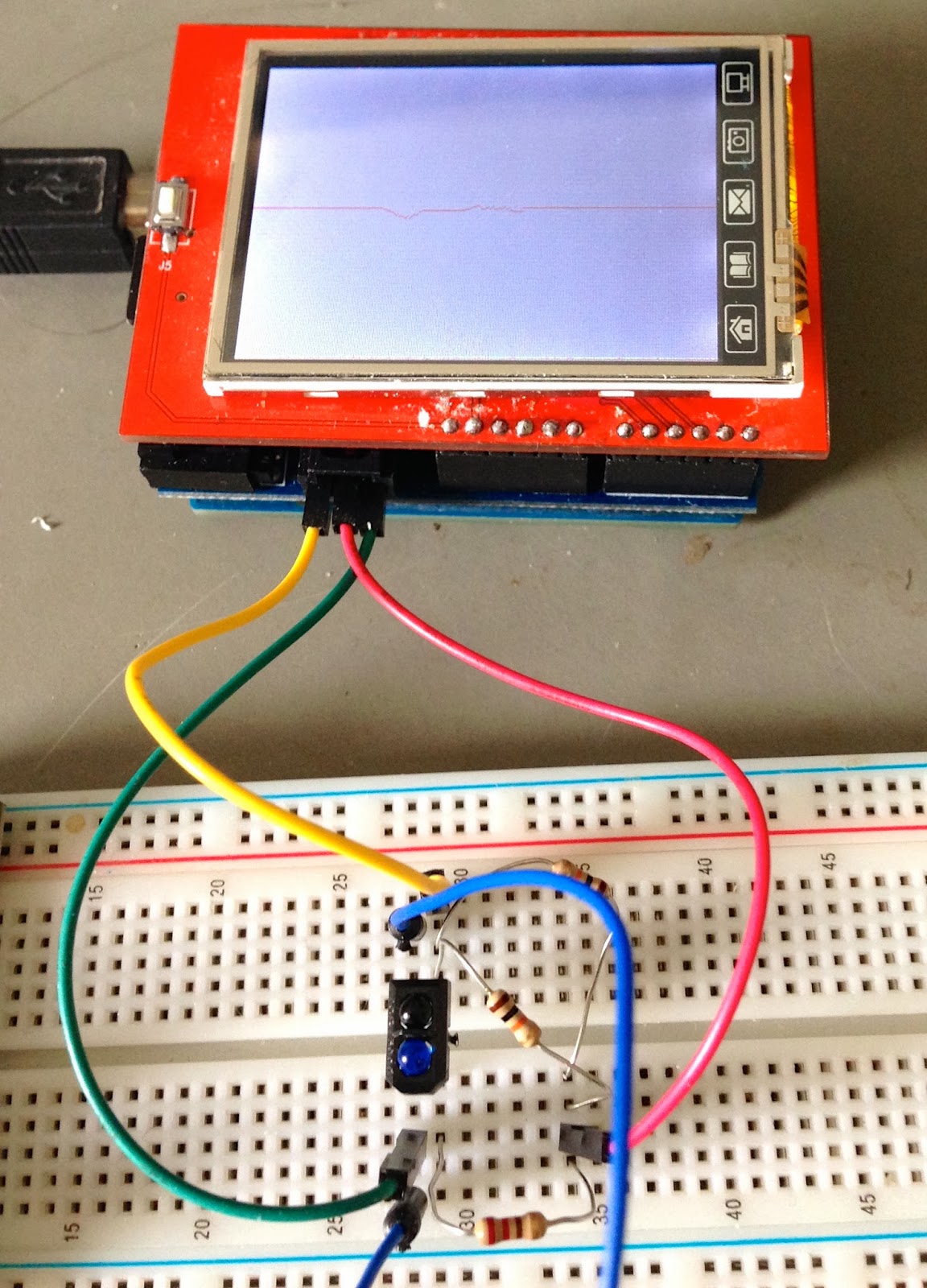 We need analog input so this isn't going to run on a Pi, but hooking this into an Arduino Uno I started getting measurements: about 0.9 when the sensor was clear, and about 0.03 when I put my thumb over it. The reading of 0.03 is a bit small, but importantly, it did seem to be changing in time with my pulse. I adjusted the resistor value on the photo-transistor, and got a reading of somewhere between 0.17 and 0.19 which was clearly indicating that I definitely have a pulse.

The coffee cup measurements from last week worked so well I thought that the tft screen might be worth another run out, and I could use the same two script approach:

For the measuring thread I decided to include some averaging, so that the several readings are combined. With a bit of tweaking I ended up with:

the tft device has an "hfill" command that makes it quick to blank out an individual line - there's no equivalent vfill (perhaps there should be?) so it was easiest to plot the graph from bottom to top, and then turn the screen around when it was finished. We pick a row based on time (40 samples per second was perfectly manageable with this hardware and looked about right), and assign that to displayY so all drawing takes place on that line. 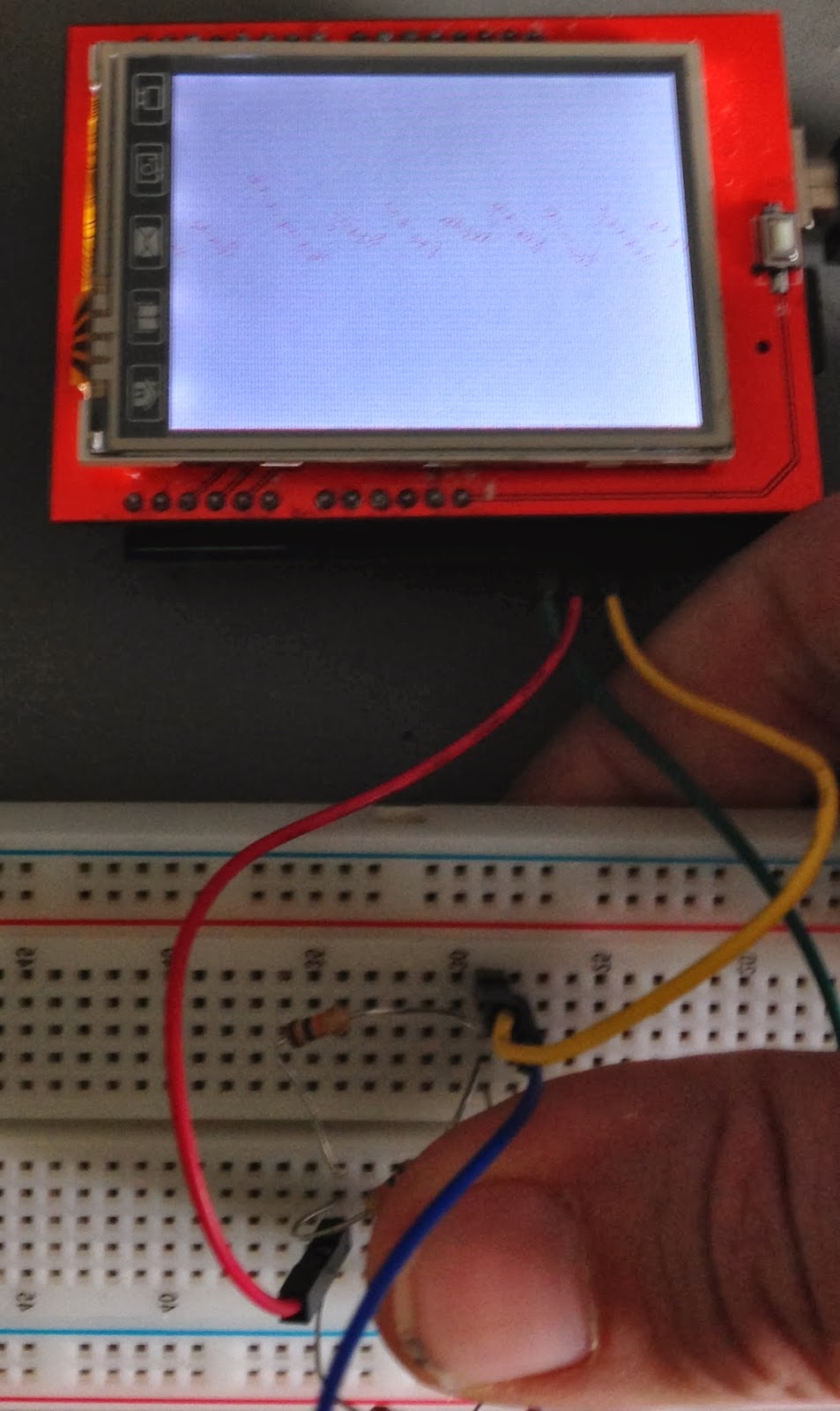 We then use hfill to blank the line, and set a single pixel based on the current reading of the sensor. The result is a graph of my pulse! (sorry for the photo - it's hard to get a good picture of the screen when you've got to keep you thumb on the sensor!)

One minor problem was that depending on how hard I pressed and what part of my thumb I used the values could change substantially - the trace would disappear completely if I moved my thumb a little too much. We're only interested in the variation with a period of about 0.5 seconds, so the final refinement was to add an averageValue variable which is the average of the reading over several seconds. By removing the, we still get the the nice pulse, but the graph automatically centres itself on screen if you keep your finger still for a few seconds.